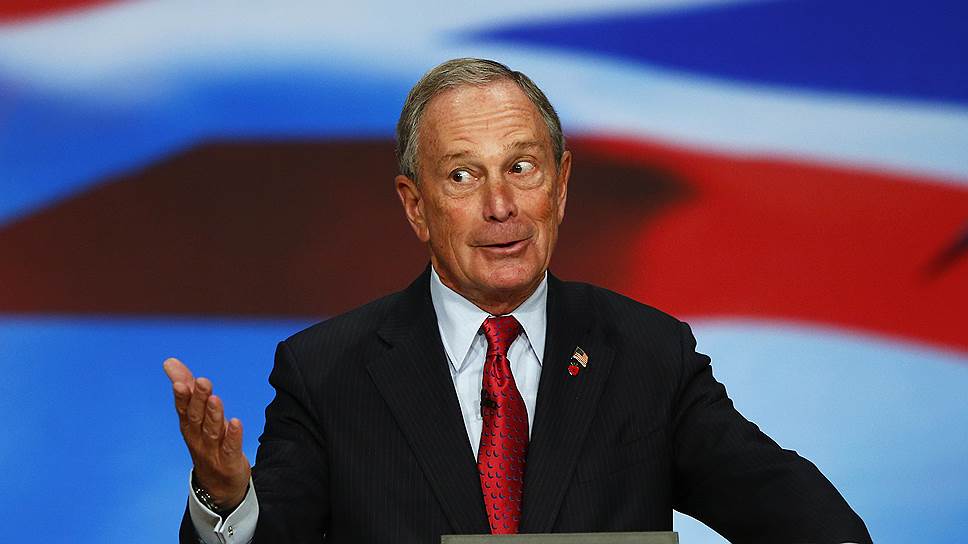 Michael Bloomberg, the former mayor of New York City and founder of the eponymous news agency, intends to run for president of the United States. It means that America for the second time in history could be led by a member of the Forbes list.

The former Speaker of the House of Representatives, Democrat Thomas O’Neill, is the owner of the phrase “all politics is local” which later came to be widely used by experts in analyzing American politics. Literally it can be translated as “all politics is local,” which quite clearly characterizes the philosophy of Americans and the United States. The founding fathers, especially James Madison and Alexander Hamilton, believed that foreign policy should be exclusively a tool for domestic needs, and that international activity should be based not on ideological but on commercial interests.

The formula “all politics is local” also means the continuity of the domestic political process, when every politician who has just barely won an election begins planning for a future re-election campaign the next day. This is exactly the situation Democrats and Republicans are in as they prepare for two major events – the November midterm elections for Congress and the 2020 presidential race. The complex political structure is sensitive to any changes that could be fatal for both the Republican majority on Capitol Hill and for President Donald Trump himself (No. 766 in the Forbes global ranking, fortune $3.1 billion).

The ratings of the current head of the White House are rather shaky. On the one hand, he enjoys the support of a large part of the population for his protectionist economic policy, which allowed him to lower taxes, protect American manufacturers and increase the number of jobs. On the other hand, the Republican has had to fend off numerous attacks related to harsh treatment of immigrants and uncertainty over health care reform. In addition, Trump remains in the crosshairs of the special “Mueller Commission,” which is investigating the influence of foreign agents on the 2016 presidential election. The Republican Party is also not in great political shape, with factional conflicts (traditionalists, moderates, ultra-conservatives, and neo-conservatives) causing constant fissures amid a noticeable strengthening of its key rival, the Democratic Party. Given the likelihood of losing their majority in the Senate, Republicans are unlikely to experiment. It is highly likely that they will pool their resources around Trump. For their part, the Donkeys, who lost the White House after the failure of their heavyweight Hillary Clinton, are in search of a new savior.

Today, the names of two potential candidates are being actively floated – Joseph Biden, who served as vice president under Obama, and billionaire Mike Bloomberg (#11 in Forbes’ global ranking, fortune $50 billion), who has been mayor of New York City for eleven years since 2002. Both candidates have advantages and disadvantages, the main one being age. At the peak of the campaign, Biden will celebrate his 78th birthday; Bloomberg is only three months younger than his colleague. So far, the record for “old age” is held by Donald Trump, who was 70 years old at the time of the inauguration (one year ahead of Reagan). The difference of eight years between the Republican and his potential rivals is quite significant in the harsh American political realities. But Democrats are known for their willingness to take risks. It was their candidates – John F. Kennedy in 1961 (age 42) and Bill Clinton in 1993 (age 46) – who made the list of the youngest presidents in history. Hillary Clinton, meanwhile, went to the polls in 2016 at age 69. In other words, the age factor can also be ignored by party elites, who present experience and wisdom as advantages.

Many foreign and Russian analysts mistakenly write that Trump’s victory in 2016 and the possibility of Michael Bloomberg’s participation in the upcoming presidential campaign signal a new trend – the direct involvement of billionaires in the political process. However, this thesis is wrong, because this trend is not new. At least four presidents came to politics from business circles: Warren Garding owned large publishing houses, Herbert Hoover was a mining magnate, Jimmy Carter owned the largest peanut farm in the country, and George H.W. Bush was an oil magnate. Digging deeper, it turns out that the first president, George Washington, was one of the richest farmer-businessmen of his time. There were even more candidates and challengers from both parties, the most prominent of which were Wendell Wilkie, Nelson Rockefeller and Ross Perot.

The oligarch Weakley defeated such giants as Thomas Dewey (the district attorney who put Al Capone away) and Robert Taft (son of the 27th President William Taft) in the 1940 Republican primaries. Rockefeller tried three times to make it to the superfinals: in 1960 he lost to Richard Nixon, in 1964 to Barry Goldwater, and in 1968 to Nixon again. The maximum the oil baron of America managed to snatch was the vice-presidential post in 1974. Billionaire Ross Perot is considered the chief architect of the unpredictable triumph of Democrat Bill Clinton, who defeated the experienced political lion Bush Sr. in 1992. As an independent candidate, Perot swept away much of Bush’s moderate electorate base with 19% of the vote (the second-highest record for an independent candidate since Theodore Roosevelt). This was enough for the Democratic governor from Arkansas to win by a 6% margin. Perot’s second attempt in 1996 was a complete failure, even though the businessman invested his own $80 million into the campaign.

Now it’s Bloomberg’s turn, whose fortune is estimated at $50 billion. Of course, money plays an important role in the election process, but by no means a key one. The Republican billionaire is a familiar image for Americans, since the party itself is considered a lobbyist for the interests of the middle class, big oligarchs and various multinational corporations. The Democratic Party, by contrast, is focused on the broader and less wealthy segments of the population, who would not like such a candidate. Suffice it to recall that Senator Bernie Sanders’ success in the 2016 Democratic primary was due to his slogan to take more from the rich and give more to the poor. The situation is complicated, and it is unclear what the party’s zest for “donkeys” will be if they throw their own oligarch into the fray against a billionaire president. In other words, Bloomberg’s very candidacy will cause an intra-party split, which will only reduce the Democrats’ chances of eventual campaign success.

The other obvious downside is that he is politically limited and opportunistic. Mike was not always a Democrat and is not officially one to this day. He was loyal to the “donkeys” until 2001, but after Bush Jr.’s victory in the presidential election he went over to the side of the “elephants” and in 2007 declared himself an independent. In the U.S. they are called “political shifters. These are the type of officials and politicians for whom the party, ideology and values are tools for implementing their own pragmatic tasks. In addition, his experience as a statesman is limited to the mayor’s office in New York City. His announcement to run for the 2008 election on behalf of an independent party drew a wide public response, but he withdrew his candidacy a few weeks before the start. After withdrawing, Bloomberg first declared neutrality, but later endorsed Senator Barack Obama (he did the same trick in 2012).

Now Mike is a dark horse for Democrats and independents alike. Nor should we forget that in order to win the 2020 election, the “donkeys” must win over a large percentage of Middle America who approve of Trump’s activities. It is hard to imagine what a billionaire from predominantly liberal New York could offer this segment to tilt the balance of power in favor of the Democrats. Thus, he has no chance in the party primaries, let alone national success. However, if, by some miracle, Bloomberg does make it to the polls and fabulously becomes the sole candidate of the Democratic Party, the Republicans would welcome it, because it is hard to think of a better punching bag for Trump.